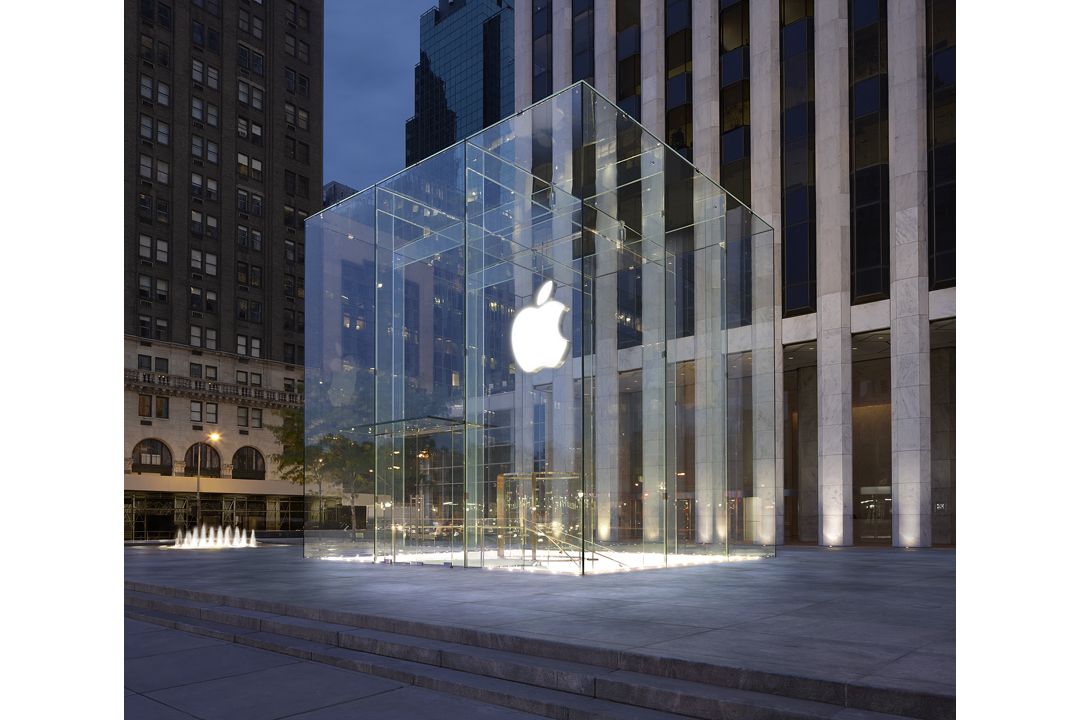 STA Research reiterated Apple stock with a Hold rating, and a $150,  12 month target on the stock, which was reported from a research note that was published on Tuesday, the 8th of November.  STA Research suggest the stock will increase by less than 10 percent for the stock within a 2 month period.

STA Research cites currency volatility as the main cause for concern for Apple, which  is the main catalyst for increasing iPhone prices in some countries that could out price consumers ability to purchase a new iPhone.  The demand destruction for Apple’s flagsip product, could spell disaster to the company’s stock, and send the stock spiralling towards recent lows and further. Indicators have demonstrated that customer demand for new iPhones are falling. STA Research asserts that if recession comes to fruition, then the stock could test the company’s 2020 low as the stock’s valuation could plummet, sharing the same fate as it’s technology based peers that have been recently hammered.

The current average analyst target for Apple Inc’s stock over the next 12 months is $172 with a Strong Buy rating. The Crowd rating for Apple is also set as Strong Buy, and the 12 month Crowd target is $174 per share.

Apple’s stock currently is rated with a fundamental a score of 6.7 out of 10 at stocktargetadvisor.com.

Apple’s stock currently is rated with a fundamental a score of 6.7 out of 10. 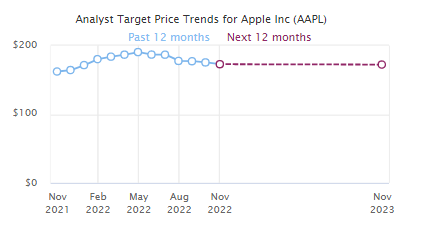 Apple Inc’s stock forecast from the 25  reporting analysts, sees the average target for Apple’s Stock at $172 for the year. Apple’s average rating from the stock is set at a Strong Buy. Stocktargetadvisor’s own stock analysis of the company’s stock is Slightly Bullish, suggesting the stock should rise. The analysis is based on 10 Bullish signals and 5 Bearish signals. Apple’s stock is currently trading in the $140 range.

Apple’s stock currently is rated with a fundamental a score of 6.7 out of 10.

Apple Computer Inc’s stock currently has a Slightly Bullish sentiment, with a fundamental a score of 6.7 out of 10, where 0 is Bad, and 10 is Excellent. 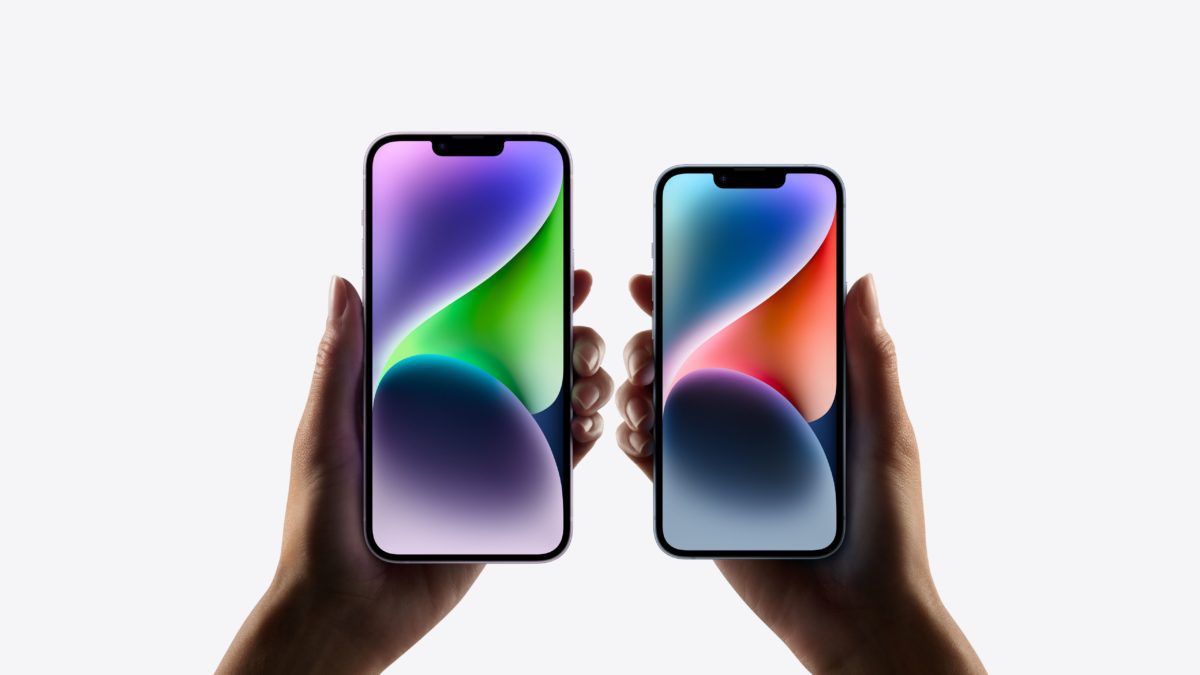 Apple stock (NASDAQ:AAPL) had its target cut at the investment firm of UBS Securities, based out of Switzerland.  Analysts for UBS cut the target on the stock to $180 from $185,  which was released from a research note that was just released on Tuesday November 8th. The analyst’s at UBS Securities currently have a Buy rating set on the company’s stock price. The UBS analyst target price is now forecasting a 25 percent rise for the stock within 12 months.

Apple Inc’s 12  month stock forecast from 25  analysts, has the average target price for Apple’s equity at $172.27 over the year. Apple’s average rating from the investment analysts is currently set at  a Strong Buy. STA Research’s own stock analysis of the company’s stock is Slightly Bullish at the moment. The analysis is calculated by using  10 Good/Bullish signals and 5 Bad/Bearish signals. The company’s stock is currently trading at $139.54.

Apple Computer Inc’s stock currently has a Slightly Bullish sentiment, with a fundamental a score of 6.7 out of 10, where 0 is Bad, and 10 is Excellent.

AAPL stock is Slightly Bullish, with a fundamental a score of 6.7 out of 10.

AAPL stock (NASDAQ:AAPL) had its price target reduced at the investment arm  for Bank of America.   Analysts cut the target on the stock from $160.00 to $154.00 from a research note that was just released today. Bank of America currently has a Neutral rating on the stock.  The analyst’s target is forecasting a 10 percent upside for the stock.

Based  Apple 12 -month stock forecasts from 25 of the covering analysts, the average price target for Apple stock is $172.27 over prescribed period. AAPL current average rating from analysts sits as a Strong Buy, which is the highest rating. Stock Target Advisor’s own stock analysis of the company’s stock is Slightly Bullish.  The analysis comprises of  10 positive/bullish signals and 5 negative/bearish signals. The stock is currently trading at $139.34. Apple stock price has changed by -9.40% over the most recent week, -0.84% over this past month, and the stock has fallen over 8 percent for the last year.

AAPL stock is Slightly Bullish, with a fundamental a score of 6.7 out of 10.

Apple stock is currently evaluated at a fundamental stock score of 6.9 out of 10, where 0 is very negative(Bearish) and 10 is very positive(Bullish). 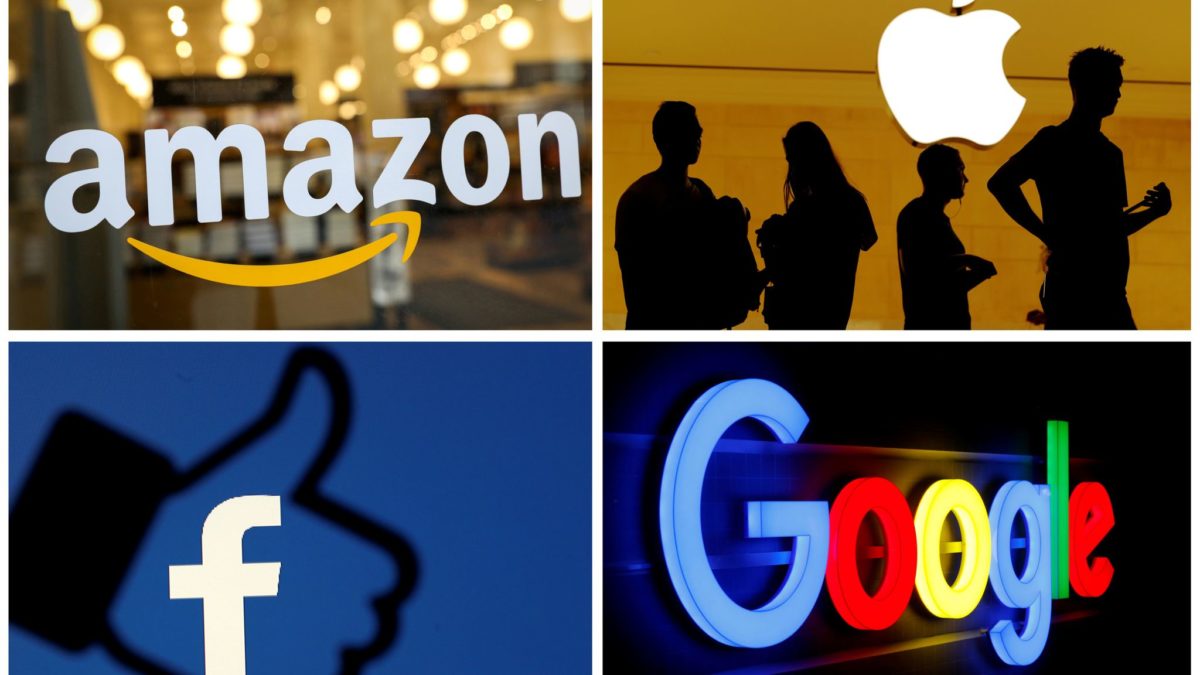 Apple(AAPL:NSD) recently surpassed three of its main rivals’ combined valuations. Apple is now valued more than Alphabet, Amazon, and Meta Platforms put together. Over the past month, Apple shares have fared much better when compared to their rivals. Cloud companies have taken the worst beatings as they are all growth-based stocks.

Apple’s recent market capitalization came in at over $2.307 trillion. Amazon, Meta, and Alphabet have a combined valuation of $2.306 trillion. It is unlikely that this metric will remain this way for long. Tech analysts believe that tech stocks are going to rally hard this year. The valuation metrics are at all-time lows for this sector.

At the beginning of 2022, Apple had a market valuation set at over $2.9 trillion. Meta, Alphabet, and Amazon added up to over $4.41 trillion in their combined valuation tally for 2022.

Analysis Based on Valuations

Shares of Apple are up almost 5 percent in the past month. Alphabet’s dropped 9 percent, Amazon lost over 18.5 percent, and stocks of Meta(META:NSD) are down 33.3 percent so far. Since January this year:
Only Apple’s results were positive from the other three companies.

Bernstein’s investment analyst, Mark Shmulik, recently highlighted the difficulties experienced under macroeconomic pressures. He asserts that investors are more likely to pick out symptoms of weakness. Alphabet(GOOGL:NSD), Amazon(AMZN:NSD), and Meta are all watched by investors, and if they show any signs of being weak.

The stock avoided massive turbulence even though there are concerns over iPhone sales. The Series 14 models of Apple’s iPhones have more features and improvements. These include:
Depending on the country, it can cost more. This is the analysts’ main concern because it could impede sales. Potential customers in U.S. and China didn’t notice the price hike compared to the Series 13 models.
Some analysts predict Apple may do so owing to ongoing supply chain issues and inflation. The U.K., Japan, Germany, and Australia all saw price increases for the new iPhones.
In the US, the price for a released iPhone 13 last year was $799, which is the same price for the new iPhone 14. In the UK, the base model of the iPhone 14 is $80 more expensive than last year’s iPhone 13.

Currency changes are the main catalysts for raising prices in some countries. Tim Cook is the CEO of Apple. He said that the business would have grown “double digits” if not for the currency issue. The company showed revenue that climbed 8 percent over its latest quarter at $90 billion.
The currency change is an instrumental component of a company’s revenue and profitability. Tim Cook stated:
“We’ve decided to go back to iPhone prices more commensurate with what our local prices were a year ago, in hopes of boosting the sales in those places.”
The company, states that it has not observed a decline in those markets so far. Over the past six months, the U.S. dollar has appreciated against the Chinese yuan.
There have been indicators that customers’ lust for a new iPhone model may be waning. While the company cites experiencing new records during September in Greater China.
Investors are apprehensive of the impact of currency fluctuations. This may have an impact on future iPhone demand and sales. Investors showed concern that a recession in various economies could affect consumers’ psychology.
This can cause them to avoid large purchases such as an expensive new iPhone. It is also possible that Apple’s stock has so far “delayed” a massive downfall, as have those of Meta and Amazon.
If the gloomy consumer emerges after a recession, then the stock could test the company’s 2020 low. Apple’s valuation will plummet and fall back in line with its peers. It appears that Apple might be treading water before the tsunami.

Currently, the average analyst target price for Apple Inc. over the next 12 months is USD 172.31, according to 25 analysts’ stock estimates for AAPL. Analysts generally rate Apple as a strong buy.
Apple stock analysis by Stock Target Advisor is bullish. Based on 11 positive and 5 negative indications. The Apple stock price was US$138.38 at the most recent close. Over the past week, month, and year, Apple stock price has changed by -11.15%, -4.85%, and 8.53%.
The Crowd rating for the stock is a Strong Buy, along with a Crowd target of $174 per share.
Apple stock is currently evaluated at a fundamental stock score of 6.9 out of 10. Where 0 is very negative (bearish) and 10 is very positive (bullish).